I. FILL IN THE BLANKS

Ans: name of the computer.

1. Which device is required to connect multiple heterogeneous networks?

2. Which is the largest type of computer network?

3. Which protocol transfers encrypted data instead of plain data?

4. How many bytes are reserved for OUI in a MAC address?

5. IP address can be automatically assigned if the network is connected with

1. Mention the name of components required to set up a MAN network. Draw a block diagram of a MAN network labeling name of each component. (Hint: MAN network is a connection of multiple LAN) 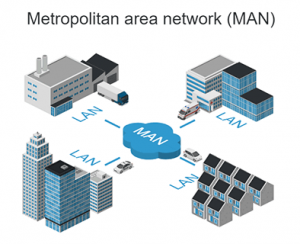 2. Why hostname should not be used to identify a computer in a computer network?

Ans: IP (version 4) addresses are 32-bit integers that can be expressed in hexadecimal notation. Its common format is x.x.x.x, where each x can be any value between 0 and 255.

4. Can we compare HTTP and FTP protocols? Mention their functionality.

Ans: The major difference between HTTP and FTP is that HTTP on request provides a web page from a web server to web browser. On the other hand, FTP is used to upload or download file between client and server.

5. How many 16 port switches are required to connect 31 computers in a network? (Hint: To connect all computers, all switches also should be connected among themselves)

Ans: Three 16 port switches are required to connect 31 computers in a network.

Ans: -Encryption is the process of converting information or data into a code, to prevent unauthorized access. Encrypted data can be again decrypted to get back the original data.

Ans: – HTTP is a client-server protocol which means, a client requests a web resource using HTTP protocol and a web server provides that resource to the client.

Ans: -The different types of Networks are as follows: –

The Internet is an example of WAN since it is spared over the world.

Ans: – In windows 10 there is an option “Rename PC”. By navigating to this option, we can easily change the hostname of our Windows 10 computer.

In Linux operating system, there is a file “hostname” in the “/etc directory, which contains the hostname of the computer. To change the hostname of such system we have to modify the content of the file.

Ans: – An Internet Protocol address (IP address) is a numerical label that is assigned to network devices to identify them uniquely.

IP addresses are the identifier that allows information to be sent between devices on a network: they contain location information and make devices accessible for communication.

Ans: – If one IP address is assigned so more than one computer, only one computer can establish the connection and the remaining computer shows an “IP conflict” error message. It means, to successfully connect a computer to a computer network, each computer must have a unique IP address.

Ans:- There are two types of IP address-

Internet Protocol Version 4 (IPv4)-They are used to identify machines connected to a network. IPv4 is a 32-bit binary number. IPv4 addresses are separated by periods

Internet Protocol Version 6 (IPv6) They are used to identify machines connected to a network. IPv6 is a 128-bit binary number address. IPv6 addresses are separated by colons.

Ans: – MAC stands for Media Access Control. It is a unique identifier for network interfaces.

Ans. The IP address of a device mainly helps in identifying the connection of a network (using which the device is connecting to the network). The MAC Address, on the other hand, ensures the computer device’s physical location. It helps us to identify a given device on the available network uniquely.

Ans. The MAC address is a 12-digit hexadecimal number that is most often displayed with a colon or hyphen separating every two digits (an octet), making it easier to read. example of MAC Address: 2C: 54:91:88: C9:E3

Ans: – A Hub is a networking device that connects other computer networking devices together. When a signal traverses a long distance, the strength of the signal decreases gradually. In such a situation, a hub can be used to act as a repeater which amplifies signals that deteriorate after traveling long distances over connecting cables.

A Switch is also a networking device that connects other computer networking devices, but Switches are generally more intelligent than hubs. A switch is a multiport device that is very much similar to a hub in appearance, but unlike hubs, a switch maintains some routing information about other network devices in the internal network.

The main functionality of the access point is to provide wireless network connectivity, some access point also has several ports to expand the network to support more wireless devices.

Ans: A service set identifier is a sequence of characters that refers to a wireless local area network. To connect to a wireless network created by an Access Point, the user needs to know the SSID of the Access Point.

Ans: The TCP (Transmission Control Protocol) is a communication protocol that is primarily used for establishing communication between computers over a computer network. When data is sent over a network, the TCP in the source computer divides those data into a series of packets and sends those packets to the destination and the TCP at the destination reassembled them.

21.What is FTP? Write its disadvantages.

Ans: The FTP (File Transfer Protocol) is a standard internet protocol used for transmitting files from one computer to another over a network. To transfer files using FTP protocol, one computer must allow the other computer to send or receive files.

The main disadvantage of FTP protocol is that it does not encrypt username, password, and data when logging in to the server and during data transfer.

Ans: The main disadvantage of FTP protocol is that it does not encrypt username, password, and data when logging in to the server and during data transfer. To overcome this disadvantage two new protocols SFTP and FTPS were developed. SFTP and FTPS both protocol uses encryption and therefore it is considered as secure protocols to transfer files.

23.Define URL. Give an example.

Ans: URL stands for Uniform Resource Locator. URL is a locator or address that points to a specific website address.

24.what is cloud storage.

Ans: cloud storage is normally a secure and ever-ready location that is held remotely.

25.What is ping command?

Ans: This is the most common networking command. This command is used to verify the connectivity between two computers. The syntax of the command is

Ans: The ipconfig command is used to determine your computer’s networking information, such as the IP address, address of its default gateway, etc.

Ans: This command corresponds to the Address Resolution Protocol (ARP). ARP maps IP addresses to MAC addresses. The operating system maintains a list of such mapping in memory. Using the arp-a command we can display the list of IP addresses and their corresponding MAC addresses.

AN INTRODUCTION TO OBJECT ORIENTED PROGRAMMING

Links and Frames in HTML 5