2. Which of the following is not a part of the female reproductive system th hibiant
beings?
(a)Ovary
(b)Uterus
(c)Vas deferens
(d) Fallopian tube

i. The offspring has the characters of both the parent.
ii. The survival of the species is ensured as there are more variations.
iii. The offspring can easily adapt to environmental changes.
iv. It also improves the health of humans.

5. What are the functions performed by the testis in human beings?

(i) Testis are the sites of spermatogenesis where sperms are produced.
(ii) The testis secretes testosterone hormone which is responsible for the growth and
development of secondary sexual or characters.

6. Why does menstruation occur?

Ans:- Menstruation is the normal bleeding of the vaginal line which starts between puberty and lasts till menopause. During this period, the body prepares itself for the pregnancy.

Every month an egg is released from one of the ovaries at the same time where the uterus prepares itself for a fertilized egg. The inner lining of the uterus gets thickened and is supplied with a sufficient amount of blood for the embryo. Since there is no interaction between the egg and the sperms, the fertilization of egg doesn’t take place. So when the egg doesn’t fertilize, the uterus lining breaks down slowly resulting in menstruation.

7. Draw a labelled diagram of the longitudinal section of a flower. 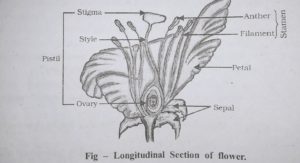 8. What are the different methods of contraception?

Ans:- The different methods of contraception are:-
Natural method:- In this method, the main focus is to avoid the meeting of sperms and ovum. This can be achieved by avoiding the mating from the 10th to the 17th day of the menstrual cycle. During this period, there are high chances of fertilization as the ovulation is expected.
Barrier method:- In this method, the meeting of sperms and ovum is avoided by using a barrier. These barriers are available for males as well as for females. Condoms for both male and female, diaphragms for female, cervical cap and contraceptive sponge for females.
Oral contraceptives:- In this method, pills are taken orally. These pills contain a small portion of hormones that block the eggs so that the fertilization doesn’t take place.
Implants and surgical method:- In this method, contraceptive devices like copper-T or a loop can be used to block the meeting of sperms and ovum. In the surgical method, the fallopian tubes are blocked in females to strop the flow of eggs, and vas deference is blocked in men to stop the flow sperms.

Implants and surgical methods: Contraceptive devices such as the loop or Copper-T arc placed in the uterus to prevent pregnancy. Some surgical methods can also be used to block tho game to transfer. It includes tho blocking of vas deferens to prevent the transfer of sperms known as vasectomy. Similarly, fallopian tubes of the female can be blocked so that the egg will not reach the uterus known as tubectomy.

9. How are the modes for reproduction different in unicellular and multicellular organisms?

10. How does reproduction help in providing stability to populations of species?

Ans: Stability to populations of species is attained by equalising the birth and death ratio.
Thus, the rate of birth should be approximately equal to the rate of death.
11. What could be the reasons for adopting contraceptive methods?

Ans:- Contraceptive methods have been devised to avoid pregnancy and control childbirth. These methods are generally adopted to prevent unwanted conception and to have a sufficient gap between successive birth.