1. Ethane, with the molecular formula C2H6 has

Ans:- Ethane, with the molecular formula C2H6 has 7 covalent bonds

2. Butanone is a four-carbon compound with the functional group
(a) carboxylic acid
(b) aldehyde
(c) ketone
(d) alcohol

3. While cooking, if the bottom of the vessel is getting blackened on the outside, it means that

(a) the food is not cooked completely.

(b) the fuel is not burning completely.

(d) the fuel is burning completely.

Ans:- Answer is option b. While cooking, if the bottom of the vessel is getting blackened on the outside indicates that the fuel is not burning completely.

4. Explain the nature of the covalent bond using the bond formation in CH3Cl. 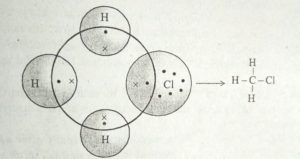 Thus CH3CI has three C-H bonds and one C-Cl bond.

(b) Electron dot structures for H2S

6. What is a homologous series? Explain with an example.

Ans:- A homologous series is a series of compounds, which have the same functional group. This also contains a similar general formula and chemical properties. Since there is a change in the physical properties, we can say that there would be an increase in the molecular size and mass.

7. How can ethanol and ethanoic acid be differentiated on the basis of their physical and chemical properties?

Ans:-
Ethanol
Does not react with sodium hydrogen carbonate
A good smell
No action in litmus paper
Burning taste

8. Why does micelle formation take place when soap is added to water? Will a micelle be formed in other solvents such as ethanol also?

Ans.: A soap molecule has two ends- one is polar called hydrophilic which is attached to
the water molecule another part is non-polar called hydrophobic which is attached to oil droplet of the material. So when soap solution is added to the oily part of the material the polar part dissolved in water and non-polar part is dissolved in oil droplet forming a spherical shape containing water molecules, soap molecules and an oily part called a micelle.
No, micelle will not be formed in other solvents such as ethanol.

9. Why are carbon and its compounds used as fuels for most applications?

Ans:-Carbon and its compounds used as fuels for most applications because they have high calorific values and give out a lot of energy. Most of the carbon compounds give a lot of heat and light when burnt in air.

10. Explain the formation of scum when hard water is treated with soap. 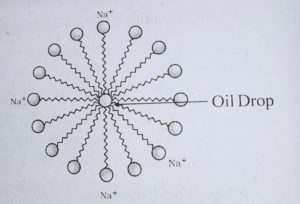 11. What change will you observe if you test soap with litmus paper (red and blue)?

12. What is hydrogenation? What is its industrial application?

Ans:- Hydrogenation is a process or a chemical reaction between hydrogen and other compounds. It is usually done in the presence of catalysts: for example nickel, palladium, or platinum.

Its industrial application is:-
Hydrogenation is used mainly to saturate organic compounds.

14. Give a test that can be used to differentiate chemically between butter and
cooking oil.

Ans:- The molecules of soap are sodium or potassium salts of long-chain carboxylic acids. The ionic-end of soap dissolves in water while the carbon chain dissolves in oil. The soap molecules, thus form structures called micelles where one end of the molecules is towards the oil droplet while the ionic-end faces outside. This forms an emulsion in water. The soap micelle thus helps in dissolving the dirt in water and we can wash our clothes clean.